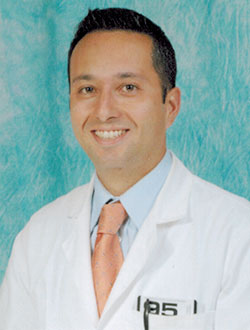 A native of South Florida, Dr. Mario del Cid joined the Retina Group of Florida after completing his fellowship in diseases and surgery of the retina and vitreous at the Cincinnati Eye Institute and the University of Cincinnati in Ohio.

In his spare time, Dr. del Cid enjoys spending time with his wife and family. He enjoys biking, golfing, and marathon running. He is fluent in both English and Spanish.

1.  Sub-Investigator – Protocol FVF4579g:  A phase III, double-masked, multicenter, randomized, active treatment-controlled study of the efficacy and safety of 0.5mg and 2.0 mg Ranibizumab administered monthly or on an as-needed (PRN) in patients with subfoveal neovascular age-related macular degeneration. Sponsored by Genentech, July 2009 to June 2012.

2.  Sub-Investigator – Protocol FVF4870g:  A phase IB/II, multicenter, randomized, single-masked, sham injection-controlled study of safety, tolerability, and evidence of activity of FCFD4514S intravitreal injections administered monthly or every other month to patients with geographic atrophy. Sponsored by Genentech. October 2009 to June 2012.

6.  Sub-Investigator. A phase 2, randomized, double-masked, controlled trial to establish the safety and efficacy of intravitreous injections of XXXXX given in combination with Lucentis in subjects with neovascular age-related macular degeneration (OPH1001), Ophthotech Corp., 2010 – June 2012.

8.  Sub-Investigator – Protocol CRFB002A2407:  A 16 week evaluation of the Novartis Health Management Tool in assessing self-test visual function in patients with AMD treated with Lucentis. Sponsored by Novartis. May 2011 to June 2012.

Pembroke Pines
Take our online Cataract self-test
Are you experiencing the onset of cataracts?
Are you a candidate for LASIK or laser vision correction?
Take the Test.
Spanish English
Ways to pay Request an Appointment Our locations 954.925.2740